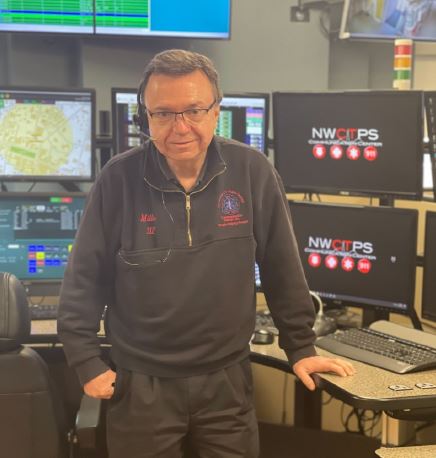 When the month of February draws to a close, so too will the 32 year career of Northwest CMED dispatcher Peter Miller.

Often referred to as “The Voice of CMED”, Millers distinct voice, acumen, and quick wit have been a steadfast fixture over the airwaves. He began his career at Northwest Connecticut Public Safety Communication Center, Inc. (aka CMED) in 1989. At that time, the dispatch center was on the third floor of Waterbury City Hall. In those days, there were only two dispatchers on per shift. As the years went on, the center and the communities it served continued to grow. In 1991, the center moved to Prospect. In 2016, the center moved to its current space on the campus of Saint Mary’s Hospital. “It started out kind of casual”, said Miller of CMED’s standards and processes. “Over the years it has become more regimented and rigorous in terms of certifications and requirements. Not to mention the center has grown exponentially”.

Prior to joining CMED, Miller worked as a news broadcaster for AM radio stations in Waterbury. “I would leave my shift at the radio station and come over to CMED for training”, explained Miller. He first began as a part-time fill in dispatch-er, but soon after took a full time role. He has remained there ever since. He continued to dabble in broadcast media in the 1990’s when he worked as a weekend DJ for Country 92.5.

While many in the EMS community may not recognize his face, his voice and demeanor are distinct. “He is articulate on the radio”, said veteran Paramedic Jimmy Whiteside. “He can also be really funny . Sometimes his injections of dead-pan humor are just hysterical and truly appreciated”.
The years have also allowed Miller to develop a keen intuition with responders in the field. “Having spoken these folks (over the radio) for many years, I can tell by the tone of their voice when things are serious. They don’t need to say it. I know by their tone and inflection”, explained Miller. “This job is all about multitasking and prioritizing. My job is to get the responders in the field what they need quickly so they can do their job and take care of patients”.

While Northwest CMED dispatchers are often assigned a number of roles, from 911 call takers to fire and police dis-patch tasks, Miller has always preferred the Med Channels. “I have always enjoyed the Med radio side of things. You get to know the field units and hospital staff and develop a kind of synergy with them”.

“I will miss his voice and his mannerism on the radio”, said Waterbury ED Charge Nurse Phyllis Guererra. “After all these years, he’s like a part of the family”.

“I have enjoyed working at Northwest and interacting with amazing first responders over the years. I wish them well”.

On February 24 at 1500hrs, Northwest CMED Dispatcher #112 will sign off for the last time as a full-timer and enjoy a much deserved retirement, with our gratitude.